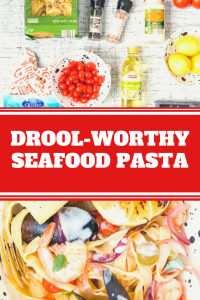 Seafood Pasta with an Alfredo Lemon Sauce and Tomato Toast

All of the ingredients below are ALDI products, purchased through the Instacart app and delivered that very same day! If you’ve never used Instacart before, don’t worry, it’s super easy and totally fail-proof. The Instacart shopper even sent me images of the produce before buying.

Preheat oven to broil. Then, wash, cut and prep vegetables for roasting. Prepare vegetables the following ways: lemons – cut in half (slice off bottom making flat surface for even roasting) // cherry tomatoes- cut horizontally // tomatoes on the vine- cut in half // red onions- julienned and tossed in garlic – cut horizontally.

Place all veggies on a cooking sheet, drizzle with EVOO, and give a few twists of s&p. Broil for 15 minutes then set aside. To make the sauce, combine the juice of two lemons, 4 tablespoons of EVOO and 1/2 the jar of alfredo sauce.

Following the cooking instructions labeled on each packaging, cook the pasta, shrimp and mussels all around the same time because they all have similar cooking time (5-7min). I like to do this towards the end of cooking, so everything is done around the same time.

Drain pasta and drizzle with EVOO, add in all ingredients and toss in a pot still on stove, keeping ingredients hot and reheating others. Serve immediately.

Cut baguette into 5-inch toast slices. Rub with EVOO and broil for 8-10 minutes or until browned. We have a gas oven so it goes quick!

Then, cut the tops of two garlic bulbs off, exposing cloves. Drizzle with EVOO and give a twist from the s&p grinders. Wrap in aluminum and bake for 45 minutes. Or just put in the bottom of the oven for the duration of cooking all other ingredients.

Then, taking the tomatoes that were roasted, rub flesh side down against large side of cheese grater (watch those fingers!) into a bowl. Smear the garlic on toasts, then spoon on tomato and top with salt and pepper. 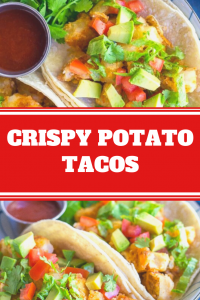